The Amazing Life and Surreal Death of

When Eric Caidin was in his young teens, he had figured out something that most folks never do:  How he could spend his entire life doing pretty much what he wanted to do, shunning the things that the established culture, schools, and authorities wanted and expected him to do.  Back in the mid-1970s when I first met Eric, he had decided to open a movie memorabilia shop, specializing in science fiction and horror. This would become the famous Hollywood Book and Poster.  His father, Stan Caidin, a Beverly Hills entertainment attorney, was perplexed about it, but had decided to support his son and help him go down a somewhat crazy life path.

It becomes clear that Eric’s early teen years, hanging out with The Beachboys for a while, taking LSD and other drugs had something to do with it. Mind altering psychedelics expanded his young mind.  He was also allegedly hanging out with the Manson family, who had latched on to Dennis Wilson at the time.  Eric’s father Stan eventually had enough of such wild behavior, and according to musician Dukey Flyswatter, had Eric “kidnapped” from the Manson group and put in a convalescent dry-out facility for a while.  Eric went to college after that, but had determined to resist any kind of establishment job.  He wanted to create his own life, his own alternative reality, an EricWorld, in which he could do what he wanted, and keep the outside influence and the rotted establishment, wars, and politicians at bay, and totally out of his consciousness.  Unlike most of us, it was a big boost to him that his family was somewhat wealthy, and in the end they helped him out instead of trying to stifle his plans and creativity.

Eric’s father Stan, as fine a gentleman as I have ever met, would sometimes just shake his head and say something like “I just can’t figure him out, maybe he’ll get it out of his system someday.”  Eric never got “it” out of his system, and spent his life building a complex universe to his own liking, his alternative universe populated with movie memorabilia, cult movies, posters, wrestling, science fiction and horror films,  B-movie actors, directors, producers, fans, conventions of all kinds, and anything else that he wanted to plug into his world.  His world became as real to him as his father’s world of entertainment law.  Many of us who knew or met Eric, after some initial puzzlement, were quite comfortable in plugging in to EricWorld.  It was a fun place to be: the constant excitement of conventions, movies, and pop culture figures who had been pulled out of the swamp of movieland obscurity by Eric, who made them his heroes. 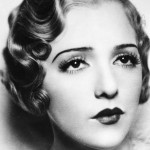 Since I had some business with Stan Caidin, I remember a couple of incidents of Eric’s early days.  Stan was a big collector of memorabilia from the Silent Movies.  He loved the era and it’s stars, especially Pola Negri and Bebe Daniels.  His poster collection was the finest, but he also had rare movie magazines from the time period and lots of other memorabilia.  At one point, the contents of an entire movie poster exchange became available, it was from a French-Canadian exchange, I think in Montreal.  Stan bought the entire load of thousands of posters and lobby cards.  The drawback was that many of the titles of the mostly American films had been painted over with thick poster paint, and a new translated title in French painted on.  The colorful graphics were still great, but the title shlocked out in French was annoying to collectors who wanted “original” posters, not “defaced” ones. When the massive load arrived at Stan’s Beverly Hills house, he was irritated that his son Eric would only take the science fiction and cult posters.  Stan had purchased the load to help Eric start his store, but no dice, Eric didn’t want any of the mainstream stuff.  His alternative world was taking shape in his mind, and he clung to it, like one of the giant leeches clung to its victims in one of Eric’s favorite films.

Stan was upset, having paid a lot for the posters, but finally accepted the fact that Eric was not going to take the bulk of the load, which was over-flowing in the garage and house.  It had to go, and he ended up selling it off by the truckload to more appreciative memorabilia dealers, including me.  He was sad that Eric didn’t want it all, but what the hell are you going to do?  The kid had a mind of his own.  Looking back, I would say that he had an “expanded” mind of his own.  LSD might not be for everyone, but it worked for Eric, although in strange and seemingly irrational ways.

I was over at Stan’s house quite a few times, usually hauling in a big load of movie memorabilia. Once, Leonard Schulman, an ephemera dealer, and I had run across a monster load of movie magazines, a collection dating to the early 1920s.  Some folks I met at the Rose Bowl swap meet had purchased a house in Pasadena, and in the process of renovation, had discovered a sealed off room, stacked with old boxes of movie memorabilia.  Stan, Leonard and I bought the whole load, and we hauled it over to Stan’s house.  The crumbling boxes were stacked in the dining room, making a huge mess, with bits of decaying cardboard trailing in from the front door.  I don’t remember ever seeing Stan so excited.  Here were stacks of silent era movie magazines with all his favorite stars in color on the covers.  We divvied up the load working and chattering late into the night, and tried to clean up best we could knowing how unhappy Stan’s wife would be when she got up the next morning and saw her beautiful house turned into a magazine landfill.  It was great fun, but not a lot of it was of much interest to Eric, unless it had Lon Chaney or Frankenstein on the cover.

Although I was only at the house a few times, I talked with Stan or saw him regularly at shows.  Once, we tried to buy a big bookshop including the building in Pasadena.  He was a great guy, and luckily Eric inherited a lot of his dad’s good character.  He was just like his dad in many ways, a little abrupt at times, very kind, and a good sense of humor. He also inherited his dad’s gambling fever.  Stan liked horse racing and even owned some race horses.  He and his daughter spent a lot of weekends at Santa Anita.  The joke was that a big piece of his income went to feeding ponies, as well as buying posters.  Eric later got to love gambling in casinos.  Maybe it’s in the Caidin DNA.  The weird thing is that in those days I didn’t see much of Eric.  He was probably at the movies or a wrestling match.  I saw his sister, who had been in a terrible car accident, but I never knew that Eric had a brother until the night of the memorial party at the Beverly Cinema.  Stan never mentioned him, and in later years, neither did Eric.  To hear the brother Robert, with his thick Texas accent, describe the wild times at the Beverly Hills house, and how Eric turned him on to LSD and drugs, was gut splitting funny. 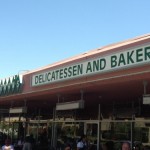 The Eric Caidin Memorial Party is 3 hours of stories about Eric, as told by his friends, fans, and others who had contact with him.  The stories are mainly funny, classic Eric.  One of his friends said that Eric died doing what he liked most, watching old films at a Palm Springs Film Noire Festival.  He was watching the light dancing on the screen, he died and he himself went into the light and became one with the film.  It was a touching remark, but what really happened is that Eric was chowing down at Sherman’s Deli, according to filmmaker Bill Lustig, enjoying a big plate of pastrami and chopped liver. Eric kept ordering extra rye bread from the waitress, making stacks of mini sandwiches.  He later  went back to his hotel where he got severe chest pains and called 911.  He died at the local hospital of a heart attack.

One thing is clear, Eric loved life and lived it to the max.  But it was his life, not the straight-jacket life that society imposes on the masses, to some extent on all of us. Film Historian David del Valle called Eric one of the “Lost Boys”, a growing army of boys who never wanted to grow up.  Influenced by Forry Ackerman, the man who coined the term “science fiction”, Eric made it a point not to “grow up”.  He was just an innocent kid in his heart, immersing his soul in the soup of pop culture, and doing all the things every kid would want to do, every minute of his life, until his last day on earth and his very last breath.  I can’t help thinking that somewhere out there, Eric Caidin is still doing it, and I for one, cheer him on.  Bravo Eric.

To view the 3 part Memorial Party click on the boxes below:

Or go directly to youtube.com: