Frank and Ava In Love and War

Join us at Larry Edmunds Bookshop on Wednesday, November 11th at 7:30pm 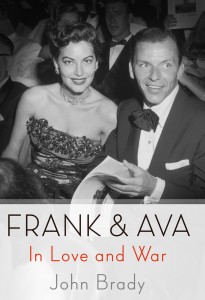 *** BONUS***Also, as part of the evening festivities, Ava’s original recording of “Can’t Help Lovin’ Dat Man,” which was deleted from the Show Boat movie track when MGM execs decided to dub Ava’s songs. The program also includes a home movie (in color) of Frank and Ava at their wedding reception on November 7, 1951, in a private home outside Philadelphia, with Frank’s March 1951 recording of “We Kiss in a Shadow” as quite appropriate background music.

“If I had to go back in Hollywood history and name two people who were most desperately and passionately in love with each other, I would say Frank Sinatra and Ava Gardner were It.”—Liz Smith.

It began in Hollywood’s golden age when Ava was emerging as a movie star. But she fell in (and out of) love too easily. Mickey Rooney married her because he wanted another conquest. Artie Shaw treated her like a dumb brunette, giving her a reading list on their honeymoon. Neither marriage lasted a year. Then, after being courted by Howard Hughes and numerous others, along came Frank Sinatra. His passion for Ava destroyed his marriage and brought him close to ruin. Their wild affair broke all the rules of the prudish era as Frank left his wife and children and pursued Ava on an international stage. They became romantic renegades, with the press following them from location to location. “Oh, God, Frank Sinatra could be the sweetest, most charming man in the world when he was in the mood,” said Ava. They married, but then came the quarrels, separations, infidelities, and reconciliations. Eventually, there was a divorce, and they thought it was over. It wasn’t. Through all of the tortured years of separation and splintered affairs with others, they maintained a secretive relationship known only to those who recognized that this was the love of a lifetime. Over the years, they attempted to reconcile, romanced and nurtured each other, right to the end. The love story of this couple has never been fully explored or explained—until now. Frank & Ava delves deeply into the lives of these two iconic stars and their turbulent lifelong relationship. More than anything else, this is the story of a romance lived out under battlefield conditions.

Two authors who have written books about Ava Gardner and Frank Sinatra meet and discuss the origins of their books, and how they how they overcame problems on the road to publication. Lawrence Grobel, author of Conversations With Ava Gardner, was one of the last American journalists to interact with the actress (when she was in LA for medical treatment shortly before her death in 1990). 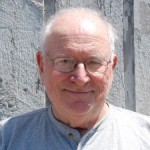 John Brady, author of Frank & Ava in Love and War, met Sinatra and worked for his recording company in the ’70s when Frank was reinventing himself as Ol’ Blue Eyes. (Brady and Grobel have known each other since 1976 when John was editor-in-chief at Writer’s Digest — and put master interviewer Larry on the cover with one of his numerous Playboy subjects: Barbra Streisand.) This program will explore the byways of the celebrity biography and the uncertain credibility of sources, including “as lied to” memoirs. John Brady’s Frank & Ava in Love and War is the first book to tell the full story of the rocky road to romance traveled by Frank Sinatra and Ava Gardner. Their encounter in Hollywood’s so-called golden age led to an affair that broke all the rules of the prudish era. Frank was married with children. Their reputations could be ruined if this got out — and it did, as Frank left his family and pursued Ava across Europe while she taunted him. They married, but then came quarrels, separations, and occasional truce between emotional wars. Eventually there was a divorce, but afterward they maintained their long, hot, messy, glorious, painful romance right to the finish line.

Publishers Weekly: “Veteran editor and author Brady approaches the love-hate history of Frank Sinatra and Ava Gardner with reliable thoroughness. He knows how to keep readers turning pages all the way to the end of Sinatra’s career, when everything that he had collected was sold at auction. Anyone remotely curious about either of these larger-than-life characters will want to read Brady’s book.” John Brady is the author of five books, including The Craft of Interviewing, Craft of the Screenwriter, and Bad Boy: The Life and Politics of Lee Atwater. He has been editor-in-chief at Boston Magazine, Writer’s Digest, and founding editor of The Artist’s Magazine. His byline has appeared in scores of publications, and he conducted the Playboy interview with naughty-naughty TV host Jerry Springer. After Sinatra’s death in 1998, Brady started work on a book about the man and his music, conducting interviews with many of Frank’s colleagues. After visiting the Ava Gardner Museum in North Carolina, he shifted to a dual biography. “She was the most important woman in his life,” says Brady. Thus, Frank & Ava in Love and War, after years of research and occasional interruptions. Brady lives and writes in Newburyport, Massachusetts. He is currently working on a book about Marilyn Monroe. 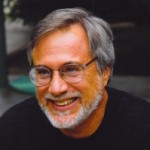 Lawrence Grobel is a freelance writer who has written 24 books and hundreds of articles for national magazines and newspapers, including the New York Times, Newsday, Rolling Stone, Entertainment Weekly, Reader’s Digest, American Way, Parade, Details, TV Guide, Redbook, Cosmopolitan, Penthouse, Diversion, Writer’s Digest, and AARP. His 1985 book Conversations with Capotere received a PEN Special Achievement award and reached the top of several bestseller lists. Grobel’s books include: The Hustons; Conversations with Brando; Talking with Michener; Above the Line: Conversations About the Movies; Endangered Species: Writers Talk About Their Craft, Their Visions, Their Lives; Climbing Higher with Montel Williams (a N.Y. Times bestseller and Publisher’s Weekly Best Book in 2004); The Art of the Interview: Lessons from a Master of the Craft (also a Publisher’s Weekly Best Book in 2004); Al Pacino: In Conversation with Lawrence Grobel(French Film Critics Award for Best International Book of 2009); Conversations with Robert Evans;The Book of Shmoga (a yoga satire); Icons (a collection of 15 celebrity profiles); I Want You in My Movie! Al Pacino’s 5 Year Obsession with Wilde Salome; a memoir, You Show Me Yours; Celebrity Salad: Close Encounters for the Verse Inclined (152 poems about celebrities); and the novels Catch a Fallen Star and Begin Again Finnegan. From 2001—2011 he taught seminars on The Art of the Interview, The Literature of Journalism, His blog, books and articles can be found on his website: www.lawrencegrobel.com.