3 Historians Detail the Complex Beginnings of a Major Force in Film-Making From the Earliest Days of the Silents.  The Actors, Owners, Producers, Directors, and Distributors Who Made History. 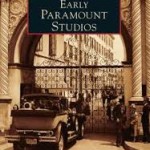 And, as Michael Christaldi, one of the authors of the new history of Paramount says, some of the early actors and directors are buried right next door in the old Hollywood Forever Cemetary.  The amount of detail that the three authors of Early Paramount Studios have locked in their memory chips is overwhelming.  The Book itself is mainly pictorial, with fabulous photos of the old Paramount Studios, Famous Players Studios, actors, owners and all the celebrities connected to the beginnings of Hollywood.  Because of space limitations in the book, a lot of text could not possibly be put in, hence the extended presentation at Larry Edmunds Bookshop, with authors Marc Wanamaker, Michael Christaldi, and E.J. Stephens.  For those serious fans out there, this 2 hour and 24 minute presentation is packed with information.  And even at that, we believe Marc could have gone on for another 2 hours.  The authors had a slide show and took questions from the audience.  It is so obvious that these three gentlemen have really done their homework, spending years researching the history of the studios. Support Larry Edmunds by buying the book from them.

Click here to get a copy of the book Early Paramount Studios from Larry Edmunds Bookshop..