A lively book about some of Hollywood’s bad boys.  The stars who are in this book hung around together and probably drank more booze and were involved in more outrageous conduct than any other “group” of Hollywood stars in memory.  Guys like W.C. Fields, John Barrymore, Errol Flynn and John Carradine are well known for their carousing, but some of the other characters you’ll read about in this amazing book are not so well known.  Like the great artist and art forger John Decker, whose paintings hung on the walls of mansions all over Hollywood (and one of his famous painting was at the old Chasen’s).  Another of the bad boys was Sadakichi Hartmann, a half-Japanese, half-German artist, writer, art critic, and showman who is little known today.  Unearthed in this book are his early adventures in New York, putting on “perfume concerts” which were not only the talk of the town for originality and culture, but led to riots and mayhem when the lower classes found out about them.  Really crazy stuff.

This book has more original material and fabulous photos packed into it than you can imagine.  Highly recommended!

You can get it from amazon.com, or from a Hollywood bookseller who also has signed copies available: 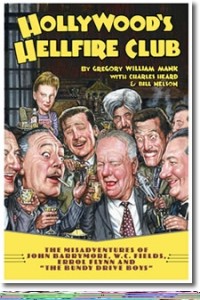